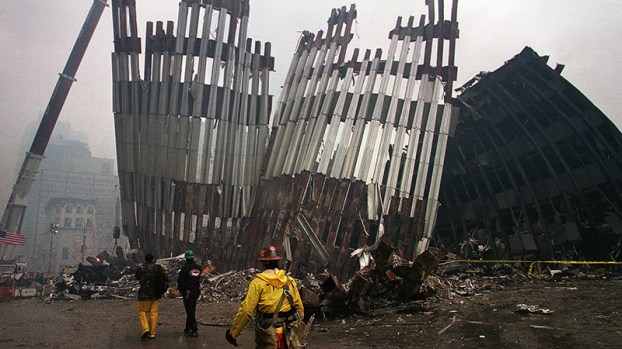 The attacks coincided with Smith’s planning period, so no students were in her classroom at the time. But her son was in a nearby kindergarten classroom.

“When I heard what had happened, I immediately walked down to his room just to take a peek at him through the door,” Smith said.

But the rest of the school day, she recalls, went on as normal — at least for the children.

“We really didn’t discuss it with the kids the day of the attack,” Smith said. “We thought it better that they not be scared or confused.”

“When I got home from school,” she added, “my family had dinner and we cuddled up on the couch for the day just wanting to remember how lucky we were.”

For Tina Wallner, a math teacher at Smithfield High School, it was — in her words — a day of just “utter disbelief.”

“My husband called the school and he told me a plane had hit one of the World Trade Center buildings,” Wallner said. “I found a room that had a TV (we had TVs in classrooms then) and watched.”

Parents then started picking up their children from school.

“We had a radio in my classroom and listened to the information,” Wallner said. “I could not teach. We talked a little, but not much because we were all in shock.”

When she got home, “I was glued to the TV for the remainder of the day,” she said.

English teacher Debra Manner was in her seventh year of teaching and her third at Isle of Wight Academy when the planes hit.

“A middle school student came running up and said that the World Trade Center had been bombed,” Manner recalls. “I didn’t believe her at first — thinking she was being overly dramatic.”

A few minutes later, she went to the school’s library, where someone had turned on a television.

With each class for the rest of the day, “we talked for a few minutes about what was going on, but then I tried to keep the day as normal as possible. Thankfully, I did not have a television in the classroom. I felt that would be too much for 11- and 12-year-olds to spend the entire day watching the disaster unfold.”

When the school day finally ended, “I remember picking up my son from his kindergarten classroom and hugging him,” Manner said. “Luckily, he and his 1-year-old sister were a little too young to comprehend what was going on. When I got home, I turned on the TV and cried.”

At 9:37 a.m., according to the 9/11 Commission Report, another hijacked plane, American Airlines Flight 77, crashed into the Pentagon. At 9:59 a.m., the south tower of the World Trade Center collapsed. Just after 10 a.m., United Airlines Flight 93 crashed into a field in Shanksville, Pennsylvania, after passengers revolted against the hijackers, whom the 9/11 Commission believes would have piloted the plane into the White House or U.S. Capitol. At 10:28 a.m., the north tower collapsed.

Veterans who may feel in need of extra help lately have a lifeline available in the Western Tidewater Community Services... read more