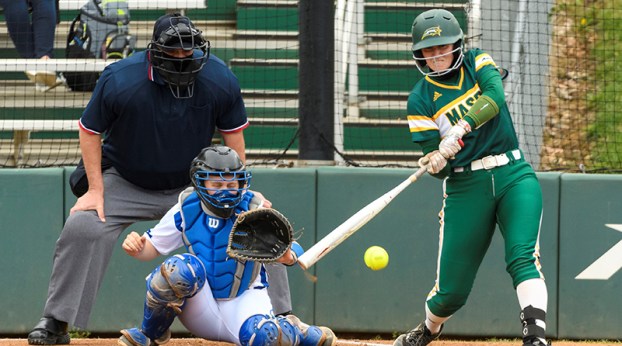 During the summer and fall, E.J. Bankson devoted extra time to improving her softball skills.

The Windsor High School graduate knew hard work was the path to more playing time. All that toil helped her win a starting spot and have her most successful season for George Mason University.

The daughter of Bryan Bankson and Wendy Fitch, the May graduate entered the program as a pitcher yet soon realized the team already had enough pitchers. And because many pitchers these days do not bat, moving to another position would allow her to hit, which she preferred.

So she played third base a bit before moving to first base near the end of the 2020 season. “The transition to first base was pretty difficult,” she said.

The George Mason coaches led her in fielding drills, hitting grounders to her at different angles. She practiced regularly with her parents during the winter break. “Going into the winter break, we were unsure of who was going to be our first baseman,” interim head softball coach Justin Walker said.

Her parents helped her become more adept at fielding ground balls and scooping low throws. Her father hit her grounders. “My mom would throw me picks,” Bankson said. “It used to be luck that I got them. I actually got really good at them.”

One of two to start all 35 games, she has thrived since becoming the starting first baseman. In a team-high 244 fielding chances, she had a .988 fielding percentage. “I used to not be too confident in my fielding,” she said. “I feel more confident. It’s not as stressful.”

Her defensive progress has been noteworthy. “It’s been awesome to see. She’s developed into a great, dependable person we can rely on,” Walker said. “The freshmen coming in are able to see that hard work pays off.”

Offensively, she has lifted her batting average. After batting .233 in 13 games during the shortened 2020 season, she hit .270 and ranked second on the squad with two home runs and 15 runs batted in.

Instead, she went back to the fundamentals. The 5-foot-7 Bankson had a plan heading into each at-bat, including looking for pitches middle of the plate to the outside and making solid contact. “The biggest thing I focused on was swinging hard,” she said.

She had a season-high seven-game hitting streak in late March and early April. Included in that streak were four consecutive two-hit efforts, three coming during a four-game series at St. Bonaventure in which she batted .500 with six RBIs and hit to all fields.

Bankson singled to center field and hit a two-run home run to left center in four at-bats of the first game. She homered in her first at-bat. “I didn’t even know it went over until I was past first base,” she said.

She doubled to left and hit a two-run homer to left in three at-bats of the third game. “I was hitting well. It was a really fun series,” she said.

She plans to use her remaining two years of eligibility while completing her master’s degree at the school.

Send updates about area athletes who are competing at the college level to Barbara Boxleitner at jdanddoc@gmail.com.

The Windsor Town Council held a budget work session May 25 at which the town manager shared some minor changes... read more