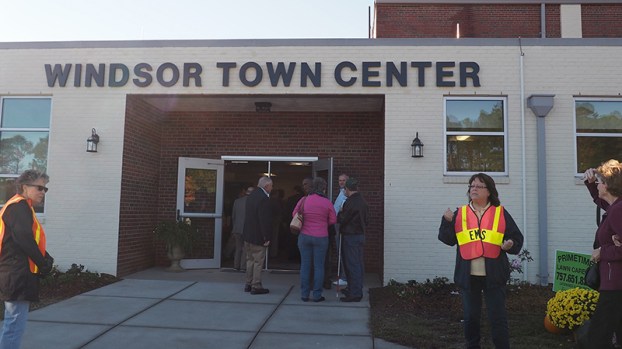 The Town of Windsor held a ribbon cutting ceremony for its newly renovated Town Center in November 2018.

Repairing interior moisture damage at the Windsor Town Center and replacing its 70-year-old roof could cost upwards of $200,000.

According to a report by Alpha Corporation, there are approximately 2,000 square feet of wet insulation beneath the roof and large areas of roof repair where gravel has been swept away, leaving the underlying ply sheets exposed to the weather. There’s also visible mold on some of the ceiling tiles.

The town plans to hold a public hearing Nov. 10 on whether to borrow money for the unexpected expense. But some Town Council members have questioned whether the building — a converted middle school gymnasium the town leases from the county school system — is worth saving.

“I think we should consider walking away from it,” said Councilwoman Kelly Blankenship.

The center, which opened its doors in November 2018 after a $1.2 million renovation that didn’t include roof work, took in just $4,756 in rental fees from Nov. 3 of that year through Dec. 7, 2019, according to town records. But its expenses from opening day through Dec. 5 totaled $98,165 — $13,978 more than the town had budgeted. Now, with the COVID-19 pandemic and associated restrictions on large events, usage is down to about half what it was last year.

Vice Mayor Durwood Scott, who acknowledged he had voted in favor of the $1.2 million renovation at the time, said “the whole picture” has changed due to the pandemic.

“To put that much money into a building you don’t own, I think we’re going to get some criticism for that,” Scott said. “I’ve heard some say the county is using it more than we are.”

Councilman Greg Willis, however, said the town couldn’t “come close to” building a similar facility from the ground up for what it spent on the 2018 renovation.

“Yes, there’s a cost impact and yes it hurts, and the timing stinks, but … we knew it was not going to pay for itself,” Willis said. “The people of Windsor deserve something for their tax dollars other than to fund the salaries of a dozen or so employees. … If we can’t fund those types of projects, we need to consider reducing services or cutting taxes.”

“Even though it’s owned by the county, that building is a part of Windsor,” Councilman J. Randy Carr agreed. “Do I think it’s something we need to move forward on? Yes, I do.”

Former mayor Carita Richardson, who championed the town center renovation project during her time on Town Council and still serves on the Town Center Advisory Board, also spoke in favor of replacing the roof during citizens’ time.

“The longer we wait to put on the new roof, the more damage we’re going to have to the building,” she said.

Despite their differing opinions, the council members were unanimous in their decision to ask Town Manager William Saunders to move forward with plans for a public hearing, obtain quotes from lenders and negotiate with Isle of Wight County regarding the possibility of sharing in the cost of the roof replacement.

Windsor has yet to select a contractor for the project. The town has received a quote of $14,186 from First Atlantic Environmental for mold remediation, and bids from three firms on the roof work.

Roof Engineering and Deshazo Roofing both proposed replacing the entire roof, the former for $149,283 and the latter for $189,000, while the third, National Roofing, proposed retrofitting in lieu of replacement for $144,095.

Retrofitting would overlay a new roof on top of the existing one but would not address the wet insulation issue. Depending on which contractor the council selects, the total project cost, including a 5% contingency fund, would be between $197,159.90 and $242,064.90.

The council plans to select a contractor following the public hearing once more information on the possibility of cost sharing with the county and interest rates with borrowing is known.