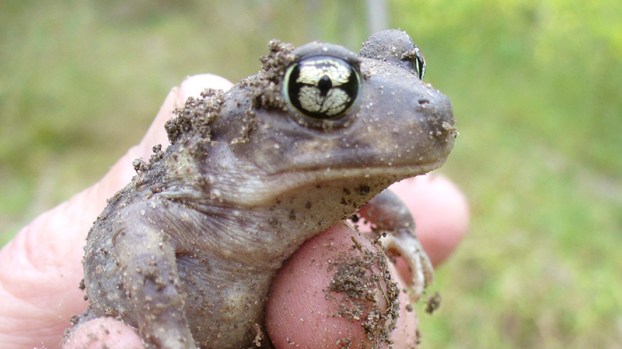 Spadefoots are rather cute if you’re inclined to like these types of animals. They have beautiful eyes with horizontally oriented pupils, much like a cat. They also curl themselves up in a little ball-like form when disturbed.

An interesting result of Hurricane Sally

As I went out early that Friday morning to read the rain gauge contents from Sally, I could hear frogs calling and immediately recognized their being Spadefoots. These are amazing little creatures who have evolved to take advantage of torrential rain events to breed. You see, it has to take a rain event such as the one we just experienced, as opposed to a run of the mill thunderstorm, to bring these frogs out from their burrowing existence for reproduction. They breed quickly and the tadpoles mature in a race to try and beat the drying of the pools.

Spadefoots predominantly live a subterranean life and are named for the little “spade” on their hind feet, which enables them to dig into the sandy loose soil in which they live. It’s due to this burrowing existence that they are seldom seen unless you can catch their mating when they all come together at once for that brief day or two to breed, and then they’re gone again.

The eggs hatch in about a day and from tadpoles, they’ll take anywhere from 2-8 weeks to mature enough to leave the water. It is that two-week part of that range that becomes most fascinating.

According to an article in Discover magazine, you see, if that pool of water begins to dry too quickly, that will trigger a morphological response in some of the tadpoles. Those will undergo a physical change that causes them to become cannibalistic on their fellow brethren. This allows those which changed to mature at an accelerated rate. As harsh as this seems, with the drying of the pool, it ensures that some will survive to become adults as opposed to all of them dying from desiccation.

It’s only natural for us to call them toads, but as it turns out they don’t share the right traits on how a toad is defined. So in essence, we have the groups of frogs, toads and Spadefoots.

Spadefoots are rather cute if you’re inclined to like these types of animals. They have beautiful eyes with horizontally oriented pupils, much like a cat. They also curl themselves up in a little ball-like form when disturbed.

If you want to learn what they sound like, search out their calls on the Internet and listen for them the next time we have a really heavy rain. These types of rains may cause problems for us humans, but one little animal has grown to depend on them for their survival.