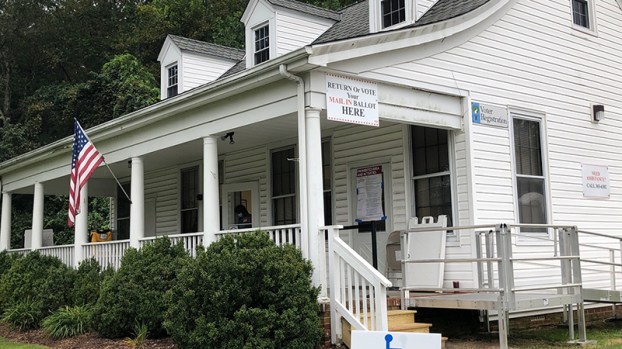 Early in-person voting for the Nov. 3 elections has been smooth in the first week, according to Isle of Wight and Surry officials.

Early voting began Sept. 18 — 45 days ahead of Election Day on Nov. 3 — and continues through Oct. 31. You do not have to give a reason to vote early; however, you must be registered to vote and present an acceptable form of identification.

In Isle of Wight, for in-person voting “so far, first thing in the morning has been the busiest and the rest of the day has been steady but no lines really,” registrar Lisa Betterton said on Sept. 25. “I have no doubt that turnout will increase as we get closer to Election Day, but we are only six days into early voting, so no crowds at this point.”

The turnout in Surry County for early voting has been steady, and the citizens seem to have a positive outlook on the early voting process,” said registrar Sharna’ White. “Most expressed their gratitude of not having to wait in long lines at the polls, and others are enthused to get their vote cast as soon as possible.”

However, Betterton said some voters have expressed concern about the vote by mail process. Recent changes to U.S. Postal Service operations that slowed service have raised doubts in the minds of some residents that their ballot may not arrive by Election Day. “The voters that have brought their vote by mail ballots have all said they did not want to mail their ballots because they were afraid that the ballot would get lost in the mailing system,” Betterton said.

On social media, some Isle of Wight residents have also said some of the return envelopes for vote by mail ballots were not sealing properly. Some said they resorted to signing their names and then taping the envelope.

In a follow-up email, Betterton said: “Yes, we are aware of this problem. We ordered 10,000 return envelopes and some of them have had sealing issues. Unfortunately, we weren’t aware of this until some of the voters called to let us know.”

Betterton said using tape or a glue stick to seal the envelope is OK.

Voting in person on Nov. 3 will be the same as in previous years. Polling hours are 6 a.m. to 7 p.m., and if you’re in line at 7 p.m., you’ll be allowed to vote. Regardless of how you choose to vote, two important deadlines are approaching. Oct. 13 is the deadline to register to vote or to update an existing voter registration, and Oct. 24 is the last day to apply to vote by mail. If you’re returning a ballot by mail, it must be postmarked on or before Nov. 3 and received by the registrar by noon on the third day after the election.

The registrars also reminded residents who plan to vote in person on Nov. 3 to check their polling place, as the location may have changed. Betterton and White noted two changes: In Isle of Wight, the Cypress Creek voting precinct has been relocated from Good Shepherd Catholic Church to the Smithfield Assembly Assembly of God Church at 1800 S. Church St.
And in Surry, the Bacon’s Castle Mount Nebo Baptist Church polling place at 5738 Colonial Trail East has temporarily relocated to Bacon’s Castle Baptist Church, located at 86 Bacon’s Castle Trail, Surry, for the Nov. 3 election. White said notices will be mailed to voters affected by this temporary change.

Betterton also shared a procedural note: if voters have requested a ballot by mail and wish to cast it in person, they must bring the entire ballot package. “Some of the voters have put their voted ballot in the return envelope and discarded the Envelope B, which you must have for your ballot to count,” she said.

For more information about voting procedures and rules, contact the Isle of Wight registrar’s office at vote@iwus.net or by phone at 757-365-6302. Contact the Surry registrar at 757-294-5213 or by email at swhite@surrycountyva.gov.

Statewide voting information, including a list of acceptable IDs for voting, is available at the Virginia Department of Elections website, elections.virginia.gov or by phone at 804-864-8901.

There’s still time to be counted in Census

So far, little more than half the population in each Western Tidewater locality — Southampton County, Isle of Wight County,... read more