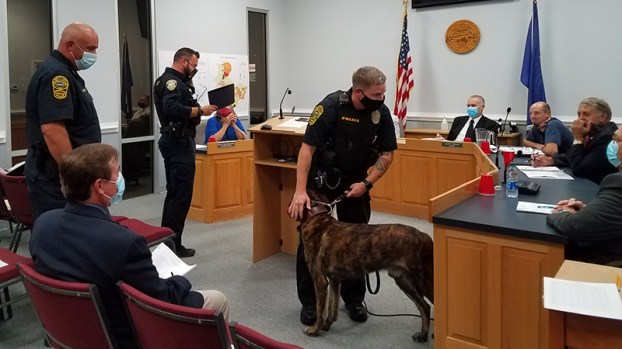 The 5-year-old Dutch Shepard joined Windsor’s Police Department earlier this year after the department received what Police Chief Rodney “Dan” Riddle termed “a very generous donation,” which enabled the WPD to get Odin from the Newport News Sheriff’s Office. For the past four weeks, Griffin and Odin have been training with Isle of Wight County Sheriff’s Deputy Eric Bertram, a certified K9 trainer through the Virginia Police Work Dog Association.

On Sept. 8, the three officers and Odin appeared before Windsor’s Town Council to update the town’s elected leaders on their progress.

“[Highway] 460 is a main thoroughfare for narcotics trafficking,” Bertram said. “Odin is now one extra tool in our tool belt to help mitigate that.”

“He comes across a broken cellphone we see in the roadway, we see it as garbage … we don’t know if it’s garbage or not, but Odin does,” Bertram said.

“The Windsor Police Department is very grateful for the assistance of our local law enforcement partners in training and certifying our working dog team,” Riddle said. “Without these partnerships, the deployment of our K-9 Unit would not be possible.”

Town Treasurer Christy Newsome will be leaving Windsor at the end of the month. As such, Windsor’s Town Council has... read more