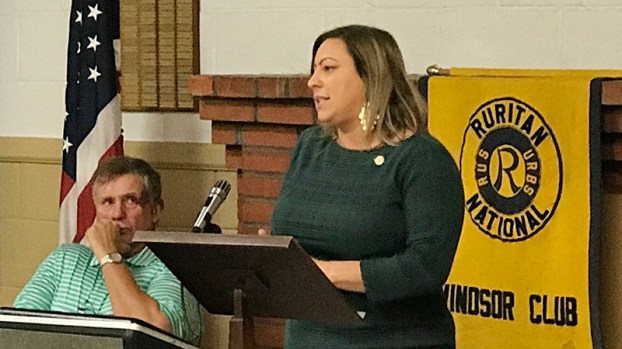 Windsor Ruritan Club President Jamie MacKenzie listens to Del. Emily Brewer, who was the guest at the group’s meeting for September. She provided updates on recent Virginia legislature.

For their September meeting, the Windsor Ruritan Club members invited Del. Emily Brewer to provide updates on the activity of the Virginia legislature, which is meeting in a special called session. She shared her concern that the present special session was called to adjust the state budget according to the loss of income due to the COVID-19 pandemic; yet, other items had instead been the focus. She also expressed concern that holding session meetings online, rather than in person, limits the interaction citizens can have with their representatives.

Brewer spoke about the upcoming vote to make a change to the Virginia Constitution concerning redistricting; a resolution having to do with qualified immunity through which lawsuits against individual police officers would be self-funded; and advocating for continued funding of school resource officers. She also talked about her concerns and suggestions for absentee and on-site voting in the upcoming November elections.

Acknowledging the increased reliance on internet for educational use, and the lack of access in parts of the Isle of Wight county, Brewer reported of her successful efforts to obtain major funding to provide reliable internet access throughout the county. With that accomplished, it is now in the hands of the County Board of Supervisors to make use of the funding.