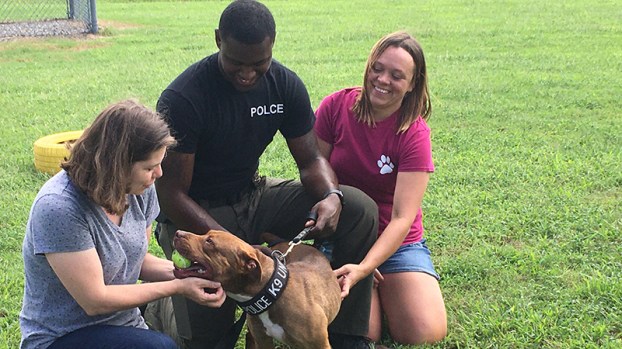 "Play with me?" K9 Fuse (aka Coco) seems to ask one of the volunteers at the shelter. With them are the dog's handler, Officer Charles Banks III and Christina Crowder, one of the animal control officers.

For a couple of hours on Saturday afternoon, K9 Fuse was a star, albeit a wandering one.

At the Isle of Wight County Animal Services, she eagerly mingled with her fan club made up of staff and volunteers. Fuse was always ready for her close-up, as photo after photo was taken while frolicking on the grounds or demonstrating her sniffing skills.

The adoration stemmed from the familiarity the humans have had in the past with the pit bull. For the 499 days she stayed at the no-kill shelter, she was known to them as Coco. That is, until about a year ago, when volunteers Chris and Tonya Lovelette of Windsor learned of and contacted the Sector K9 Foundation. The organization, in cooperation with the Animal Farm Foundation, searches for shelter dogs to be trained.

But by giving her things to do, they got her to calm down and learn to play well with other residents. The Lovelettes, who “have a passion for pit bulls,” are also credited with some training, which was shown on a video that helped persuade Sector K9 that Coco could be more than just lovable.

Following the adoption, she received not only training for law enforcement work, but also her new identity.

Officer Charles Banks III of the police department in Ferris, Texas, was assigned as her handler. As a child, he grew up with German shepherds, so familiarity with dogs was already in his life. Banks still had to take a personality test, which included a series of questions that could indicate readiness to have a canine for a police partner. He was paired with her on June 12, and the two already have been busy.

“She’s been trained [so far] to sniff out ecstasy, cocaine, methamphetamine and heroin,” said Banks.

During some demonstrations, K9 Fuse located objects laced with scents that were hidden in a vehicle, a tire and within a ball thrown into a mix of others in a child’s swimming pool. She quickly found that one and gave it a lengthy chew.

The reason for their visit was that Banks and K9 Fuse chose to make a short vacation with a stop at the animal shelter to see her former family for a couple of hours. The officer added that this might become an annual visit.

Richards said he would like to see other animals from the shelter to become similar success stories.

One of the other volunteers, Dan Sherry, said he had had no contact with pit bulls until he came to help out at the shelter three years ago.

“Now I am as comfortable with them as a beagle,” said Sherry. “Pit bulls are the sweetest and most misunderstood dogs.”

Dorothy G. Gwaltney, a lifelong resident of Isle of Wight county and 50-plus-year member of the Woman’s Club of Windsor... read more