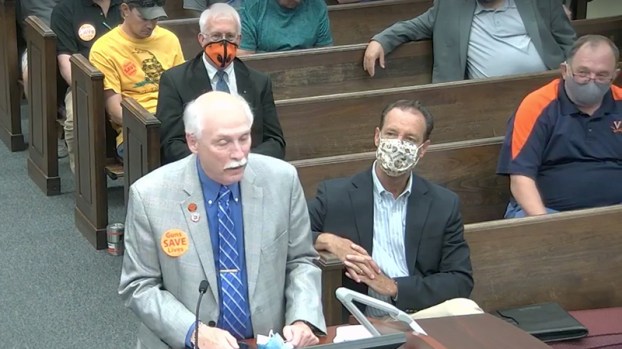 Some Isle of Wight gun owners are hoping the county’s Board of Supervisors won’t ban firearms in government buildings, public parks or other areas, even though it now has the authority to do so.

Effective July 1, House Bill 421 and its companion legislation, Senate Bill 35, now authorize localities to prohibit the possession or carrying of guns, ammunition or firearm components in those locations, with some exceptions for training and athletic events that require the use of a firearm. The measure is one of several new gun laws the General Assembly enacted earlier this year that go into effect this month.

Others include reinstating Virginia’s one-handgun-a-month rule, requiring background checks on all gun sales, prohibiting people subject to protective orders from buying or owning guns, requiring gun owners to report any lost or stolen firearms to law enforcements within 48 hours, and increasing the penalty for recklessly leaving firearms in the presence of children. Virginia has also joined 19 other states and the District of Columbia in enacting what some refer to as a “red flag” law, which establishes an extreme risk protective order allowing law enforcement to temporarily confiscate firearms from people deemed a danger to themselves or others.

“The Virginia Citizens Defense League has created a custom resolution for each locality, which creates a commitment by the local government to refuse to pass any gun control even though the new law gives you that ability,” said Mark Wooster of Rescue. He then urged the Board to adopt said resolution that evening.

“We live in a society that basically condemns lawful citizens, and law enforcement, while rewarding criminals, rioters, looters and murderers,” he added. “This constant attack on our Second Amendment and the erosion of our Constitution needs to come to an end.”

“It was Benjamin Franklin, at the founding of our country, who said ‘Those willing to exchange essential liberty for a small amount of security deserve neither liberty nor security,’” added Jeff McFather of Smithfield. “Don’t turn law-abiding citizens into criminals because in one county it’s this way and in another county it’s another way.”

“There’s no real need for it, there’s been no issues in any of the localities with anything in their government buildings, their parks … what we are trying to do is avoid this patchwork situation,” said Phillip Van Cleave of Chesterfield County, speaking as president of the VCDL, an organization he said has 24,000 paying members.

There was, in fact, a deadly mass shooting just last year in a municipal building in Virginia Beach. The gunman was reportedly a city engineer who appeared to randomly target people he worked with, killing 11 city employees and one contractor trying to obtain a permit. The shooter himself was killed in a shootout with police.

“Criminals don’t obey the laws — they don’t care about the laws,” said Jim Polanosky. “These are dangerous times with all the protests we have going on right now, it’s been very volatile.”

The Board, however, was disinclined to pass the requested resolution.

“Personally, I don’t think we need a gun in every public place, I don’t think everybody needs to be carrying a gun,” said Hardy District Supervisor Rudolph Jefferson, who then stated that with regard to protests, the ones that have occurred locally have remained peaceful.

“I do believe that Isle of Wight County, staff, this Board, administration and our county attorney, if we need to make some changes to affect something, whether it’s gun control, whatever, we have the manpower and the know-how to generate any resolution that’s necessary,” he added. “We don’t need an outsider coming in, telling us to approve a resolution for gun control.”

By Amber Williams [Editor’s note: This continues Amber Williams’ multi-part series about the effect the COVID-19 pandemic has had on... read more