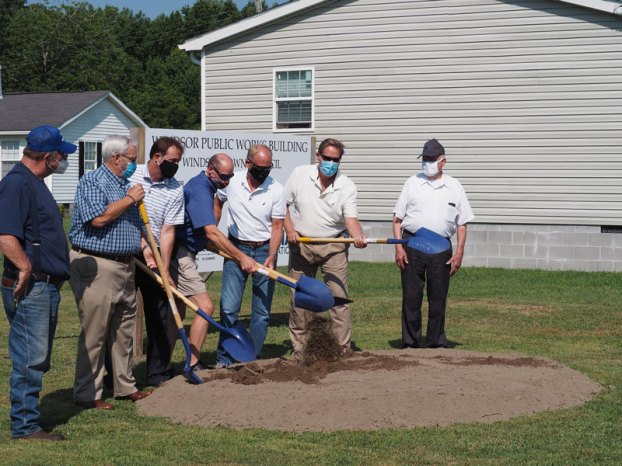 The town of Windsor hosted a groundbreaking ceremony on July 21 for its new Public Works building, which is to be built next to the town’s water tower on East Griffin Street.

The roughly 4,000-square-foot building is intended to house the town’s maintenance vehicles, equipment and spare parts. It will also serve as a new office for the town’s public works staff, which operates out of an old pump house on Duke Street.

Construction, which is to begin sometime this week once the town issues its notice to proceed, should take a little less than a year, according to Interim Town Manager Sanford “Sandy” Wanner.

In May, Windsor’s Town Council awarded the construction contract to C.W. Brinkley, a Suffolk-based firm, which had bid $621,075 for the project, including the cost of site work. The town has retained Alpha Corporation as its construction manager, who had previously worked with the town in 2018 on the renovation of the Windsor Town Center.

During the ceremony, Councilman Walter Bernacki thanked the current and former Town Council members who had begun the planning process for the structure several years ago, as well as the residents of the town, for supporting the project.

All 2020 Isle of Wight County Fair events are now canceled as a result of the COVID-19 pandemic. This includes... read more