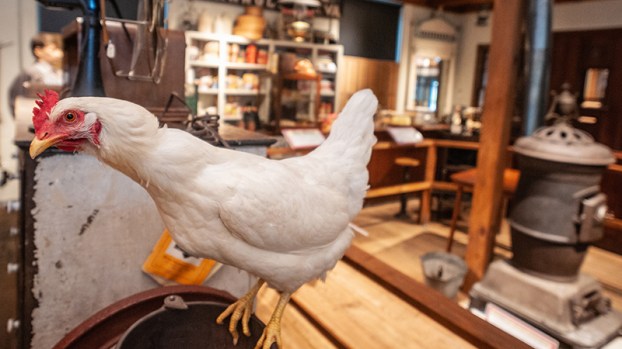 This hen, visiting courtesy of Cheryl Ketcham of Finley's General Store in Carrollton, jumped on a display at the Isle of Wight County Museum to get a better look. This area of the museum seemed to a favored by her and the accompanying Mr. Rooster.

An eggs-citing date to crow about

People from a variety of places tour the Isle of Wight County Museum, but on Wednesday, two of its most unique visitors came all the way over from Carrollton to see the sights: a rooster and a hen.

Jennifer England, who is the museum director, told Windsor Weekly that the fine, feathered couple’s visit was inspired by an online broadcast of penguins walking about in a Midwest art museum (https://www.travelandleisure.com/animals/zoo-penguins-tour-art-museum-kansas-city).

“I saw the penguins and thought it would be really awesome if we could get some,” she said, acknowledging that perhaps the closest might be the Virginia Aquarium and Marine Science Center. “But I do know a fair number of folks who have critters.”

One of those humans is Cheryl Ketcham, owner of Finley’s General Store in Carrollton, who agreed to bring over the poultry. Calves and donkeys weren’t an option as they would in all probability be like bulls in a … well, you know.

“It was a chicken date,” said England. “They had a grand time exploring the exhibits, but they appeared to favor the country store and the exhibits detailing the older history of the county.”

She continued, “The date lasted for about an hour. They did jump on things and got to have a better look around. At one point the hen walked off and rooster crowed a bit, perhaps asking, ‘Where is she?’”

Feeling peckish afterward, the handsome-looking couple got grapes to eat. Enough so that they could share with others back at the coop.

England added, “In case you were wondering, the chickens were perfectly behaved and left behind only a bit of straw from their traveling carrier.”

Could there be future dates at the museum? Stay tuned by watching the museum’s Facebook page to find out.

ISLE OF WIGHT Applications for the 2020-2021 Chamber Student Leadership Institute are now available, according to the Isle of Wight... read more