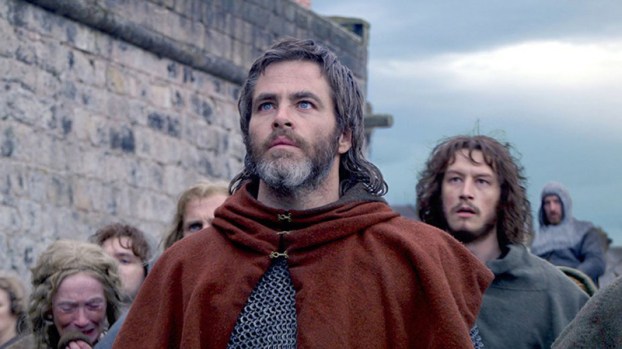 I could tell you that Chris Pine goes full frontal, has a Scottish accent and mullet, sings and kicks major butt in “Outlaw King.” Or I could tell you the film is an epic — even more brutal — companion piece to “Braveheart” that is sure to get the blood pumping and rip at your heartstrings! Either way, you are really going to enjoy Netflix’s next hit film that explores Robert the Bruce’s rise to power against the English crown in 14th century Scotland.

Before I get too far into this review, I wanted to highlight this movie isn’t for the faint of heart… especially for fellow animal lovers who should beware of tonssss of upsetting, gruesome horse-killing scenes. One of the best parts of the movie are the realistic battle scenes and director David Mackenzie definitely does not hide the fact that horses were brutally targeted and killed. There are also extremely grisly battle scenes with people, too. It honestly may be the goriest movie I’ve ever seen, with scenes of people being drawn and quartered and split open from chest to navel. And these battle scenes carry on for an extended period of time. Since this is a Netflix movie, the film should avoid the critical eye of the MPAA, which is for the better. I don’t know how some of the more insane scenes would stay in otherwise.

Speaking of battles, Netflix definitely spared no expense when making the epic “Outlaw King.” The battle scenes and set dressings alone must have cost a pretty penny, and I had to keep reminding myself that this was a Netflix film. It really shows that no story is too big (or too small) for the streaming giant. Throughout the film, I consistently marveled at its production value and was impressed by everything Mackenzie was able to accomplish. For example, one of the opening scenes of the movie was shot to look like a long, continuous take. There were other similar long takes that I appreciated in a story of this magnitude and with so many moving parts littering the backgrounds of every scene.

“Outlaw King” consistently looks like a difficult (and painful) movie to film for all involved, especially the one river chase scene that had me on the edge of my seat. Chris Pine is fantastic as Robert the Bruce and is really able to rock that Scottish accent, which has to be one of the hardest accents to perfect. This is one of my favorite performances of Pine’s and I love that he branched out to conquer a role this difficult and different than what we have seen him do before. And major props to him for having the courage to take on a Scottish hero as an American. Aaron Taylor Johnson and Florence Pugh are additional highlights, with the latter sure to be Hollywood’s next up and coming star. Her chemistry with Chris Pine was off the charts, and I can’t wait to see what she has coming out next.

Don’t think I’ve forgotten to mention Scotland. “Outlaw King” is a love letter to Scotland, whose breathtaking scenery becomes a character of its own and is a critical element for a story about a king and his people’s love for their country. Allowing the audience to see Scotland’s beauty showcases the beautiful country they are fighting for and, of course, is a great advertisement to travel there. It sure sold me, though I didn’t need much more selling after watching “Outlander!”

I will never get sick of seeing epic stories of European, especially British, quests for power during times long ago. But I can appreciate these types of movies aren’t for everyone and some could find the film at times boring and monotonous, especially as the battle scenes begin to run together during the film’s almost 2.5 hour run time. However, if you, like me, are a fan of historic epics, want to see Pine bare his soul (and other things) in a great role, and are ready to see some incredible action scenes, get ready to stream “Outlaw King” in November on Netflix!

LAUREN BRADHSHAW is a lover of all movies, even the bad ones. Follow her on twitter @flickchickdc. She grew up in Courtland, graduated from Southampton Academy and doubled-majored in foreign affairs and history at the University of Virginia. She lives in the Washington, D.C. area.

What makes Christmas an event to be celebrated

Sam Askew “And ye, beneath life’s crushing load whose forms are bending low, Who toil along the climbing way, with... read more