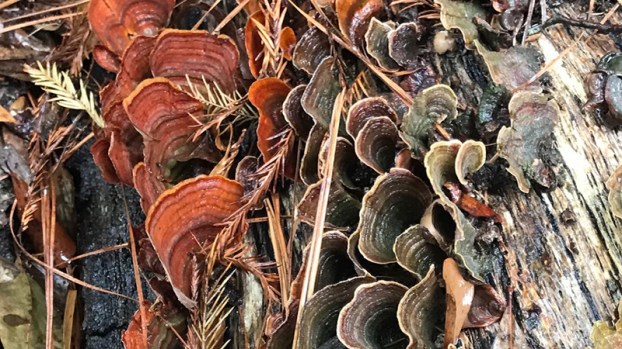 Turkey Tail Fungus, easily found in the fall for its beautiful rounded display, grows in rows on dead logs or limbs in colors that mimic that of a wild turkey’s tail. It is not only beautiful, it is also beneficial in decomposing the wood for other organisms ultimately turning the wood into soil.

I know we are all craving fall. Maybe November will satisfy our appetites since October confused us with mostly warm, wet weather. But something likes that perfect combination … mushrooms! Have you noticed them? They are everywhere; lots of them. Every shape, color and name. There are oyster mushrooms, earthstars, puffballs, bird’s nests, fairy rings, stinkhorns, jellies, morels, chanterelles, fleshy polypores, teeth fungi and more. My friend Cheryl seems to find ones with “heart” shapes hidden in them and was especially fond of photographing the emergence of a large fleshy pink fungi cluster, capturing exactly how big and blobby it could get before someone kicked it.

Are there more mushrooms than normal right now? Believe it or not, the fall rains of our region produce the largest number of mushrooms in the entire year, although mushrooms can be found during most of the year if you know where to look for them. The hefty amount of fungi will dissipate when cold November nights plunge temperatures below freezing, and winter will prove to be the worst season for finding edible mushrooms if you are a forager. Some folks believe that all toadstools are poisonous and that all mushrooms are edible. Toxins are found in in many families of mushrooms, so get a field guide like “Mushrooms of North America” by Orson K. Miller Jr. to learn to recognize which are edible and which are poisonous.

The role of fungi is intriguing. They lack chlorophyll and must live on organic matter. Some fungi decompose or break down various kinds of dead plants or animals and are called saprophytes. Others, called parasites, attack living organisms. A third group forms a mutually beneficial relationship with higher plants and are called mycorrhizal associates.

Saprophytes, our decomposers, can be found on dead organic matter including leaves, needles, grass, logs, limbs, pine cones, nuts, dung or even dead or living fungi. An example of this mushroom is Turkey Tail Fungus (Trametes versicolor.) This shelf fungus, easily found in the fall for its beautiful rounded display, grows in rows on dead logs or limbs in colors that mimic that of a wild turkey’s tail. It is not only beautiful, it is also beneficial in decomposing the wood for other organisms ultimately turning the wood into soil. Turkey Tail mushrooms have recently been used holistically in boosting immunity and fighting cancer.

Parasites grow on living trees and other plants, extracting their nutrients. Parasitic varieties of fungi like powdery mildew, downy mildew and rust can easily destroy our flowering gardens and fruit trees.

About one third of the mushrooms growing in our forests are mycorrhizal fungi. Tree roots feed the fungus with sugar as a product of photosynthesis, and in turn receives from the fungus several different nutrients such as nitrogen and phosphorus, which the fungus takes up from the soil. Many mycorrhizal fungi are host specific, which means that they only grow with specific tree species with varieties found in both deciduous and coniferous forests.

I never really saw the tree beside Cheryl’s fleshy pink mushroom cluster photos, but I bet it was there. And it was probably a beauty that benefited from a fungi.

JONI CARLSON is a Virginia Master Naturalist with the Historic Rivers Chapter.

Lauren Bradshaw I’m sure you’ve probably heard by now that “Tag” is based on a true story, but buckle-up, you’re... read more