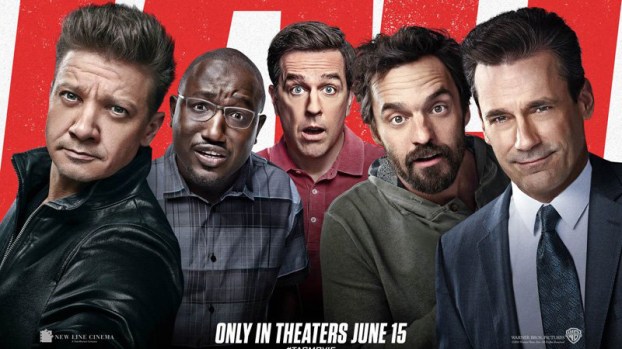 I’m sure you’ve probably heard by now that “Tag” is based on a true story, but buckle-up, you’re about to hear the backstory again. A group of insanely competitive, childhood friends has been playing the same game of tag for one month of every year … over three decades. Although the five adult men (played by Jon Hamm, Ed Helms, Jeremy Renner, Jake Johnson and Hannibal Buress) are now scattered throughout the country, every May they go on high alert and travel anywhere and everywhere to tag their friends and ensure they are not the last one tagged “it.” Because this game has been going on for so long, the friends have to resort to disguises and other ruses to attempt going undetected in their quest to tag a friend. They’ve even gotten their spouses and other friends and family involved. When it comes to tag, these guys aren’t playing around and their handbook of rules, which includes no girls allowed and no tag backs, is a testament to that.

Hoagie (Helms) gathers his childhood friends together, determined for one of them to finally touch the never-tagged Jerry (Jeremy Renner.) This is Jerry’s final season before retiring with a perfect record, and his friends aren’t about to let that happen without a fight. The yearly game of tag gets even more exciting when a Wall Street Journal reporter (Annabelle Wallis) sees the potential for a crazy, entertaining story and decides to follow the guys around. As the game heats up and Jerry continues avoiding his friends’ attempts at destroying his perfect game, the pals start to realize winning isn’t as important as :gulp: friendship.

Overall, the premise of “Tag” is better than the execution. The film has its funny moments, but also underuses a lot of its cast, had little character development, and had a terrible third act “twist” that completely took me out of the movie. None of the characters were particularly well-developed, nor did I care what happened to any of them. I obviously am not going to spoil anything that happens in the film, but let’s just say the final scenes cause a jarring twist in the film’s tone and will leave a record scratch sound ringing in your ears. Also, who the hell casts Rashida Jones in a movie and hardly uses her? Have these fools not seen how awesome she is in “The Office,” “Parks and Rec,” etc.? And don’t even get me started on all of the jokes about miscarriage. I don’t get easily offended, but when you decide to “go there” and make extended jokes about a sensitive subject (like miscarriage) they should at least be funny; in “Tag” they came off as gross and mean-spirited.

Thank goodness for Isla Fisher and Jeremy Renner, who were “Tag’s” standout stars and responsible for the funniest scenes. Although Isla’s character isn’t able to participate in the game of tag, because of that whole pesky being a woman thing, her character’s over-the-top competitiveness and support for her husband made me laugh the most. And Renner’s Sherlock Holmes-esque inner-monologue that shows just how much of a genius he is at :ahem: tag, was another highlight. It’s insane that Renner broke BOTH ARMS during the first few days of shooting and had to wear green screen casts throughout the rest of the shoot. You wouldn’t be able to tell if you didn’t know.

After almost two hours, “Tag” overstays its welcome. We get it; the main characters will do anything to tag Jeremy Renner. The repetitiveness was trying my nerves … and wasn’t helped by the final scenes. It was fun to see the actual people who inspired the movie before the final credits rolled, showing so many of the techniques in the film were used in real life … but save your money and wait for this as a rental.

LAUREN BRADHSHAW is a lover of all movies, even the bad ones. Follow her on twitter @flickchickdc. She grew up in Courtland, graduated from Southampton Academy and doubled-majored in foreign affairs and history at the University of Virginia. She lives in the Washington, D.C. area.

Michelle Pfeiffer is in ‘Ant-Man and The Wasp’ Must you hear more?

Lauren Bradshaw What better way to spend the most excruciatingly hot days of the summer than in the sweet, sweet... read more